Since 1921, approximately 47 trillion cubic feet equivalent of natural gas has been produced from over 40,000 wells in the San Juan Basin. Coalbed methane and conventional reservoirs such as the Fruitland Coal, the Pictured Cliffs sandstones, the Mesaverde sandstones, the Gallup sandstones and the Dakota sandstones have been the primary producing horizons within the basin. 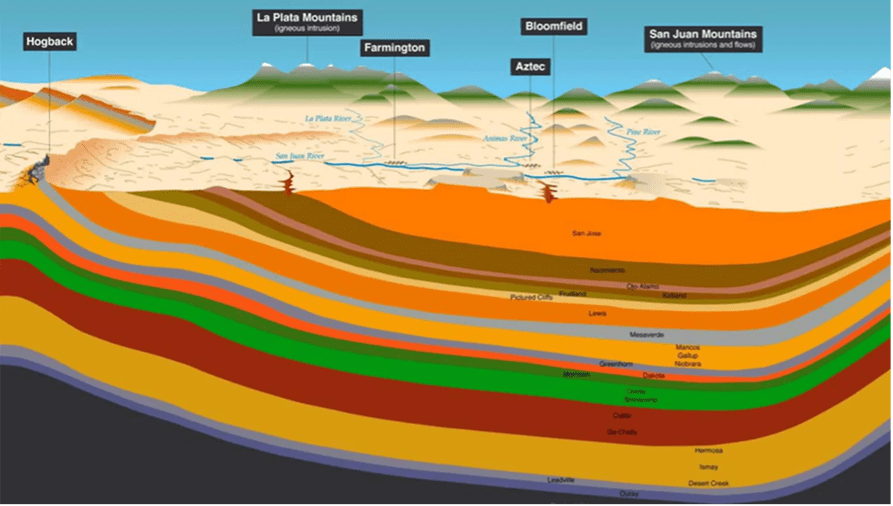 Courtesy of the Farmington Museum

The Mesaverde, Gallup and Dakota sandstones were sourced in whole or in part from the Mancos Shale whereby organic matter buried in the deepest part of the basin was first converted to oil, and as heat and pressure were applied over time became gas within the “Mancos Cooking Pot”. Immense quantities natural gas were generated and preserved in this extremely dense and tight rock which cannot be developed and produced economically from traditional vertical wellbores.

Since its inception, NueVida has focused on identifying the optimal areas for Mancos Shale development within the basin. Operational issues, such as rough topography, seasonal drilling closures due to wildlife habitat and limited road access, and proximity to gathering lines and processing facilities, were incorporated into our evaluation and selection of core asset areas for acquisition and development.

There have been fifteen successful horizontal Mancos dry gas wells drilled and completed from 2010 to 2021 in the northern New Mexico portion of the San Juan Basin. NueVida plans to be the first operator to develop the Colorado portion of the Mancos dry gas play utilizing the most modern practices in horizontal drilling and fracture stimulation.  Horizontal/long radius drilling and fracture stimulation have been staples of the oil and gas industry for more than sixty years. For the past twenty years, the evolution and advancement of these technologies have allowed for applications in ultra-tight shale formations such as the Mancos Shale.

Improvements in computer processing have been a major driver for successful implementation of these practical sciences and allow for drilling numerous horizontal wells from one site. A single seven acre well pad is sufficient surface location for all drilling, completion and production operations for a dozen or more wells capable of producing natural gas from the reservoir under four square miles of land (2560 acres).

In La Plata County, Colorado, for example, twelve horizontal Mancos Shale wells will generate more gas than seventy-five Fruitland Coal wellbores each of which would be located on a pad covering at least one acre. This represents a reduction in surface use of greater than ninety percent from historical disturbance activities in the county!

We will all be living in a hybrid energy world for many more decades, and natural gas will be a key component as a reliable and inexpensive source of energy, as well as a transition fuel. Natural gas is one of the most versatile and powerful energy sources with greater than sixty percent less carbon/greenhouse gas emissions than other hydrocarbon fuels.

Over the last decade, natural gas has become the fuel of choice for the newest generation of electric power plants. In addition, natural gas is a raw material used in the manufacture of fertilizer, plastic, paints, and many other industrial substances on which we rely.

More than half of the homes in our country are heated by natural gas and more than forty percent of the United States electricity supply is generated from natural gas. During the first year of production, one Mancos shale horizontal well will produce enough gas daily to heat and provide electricity to every single residential building in La Plata County!